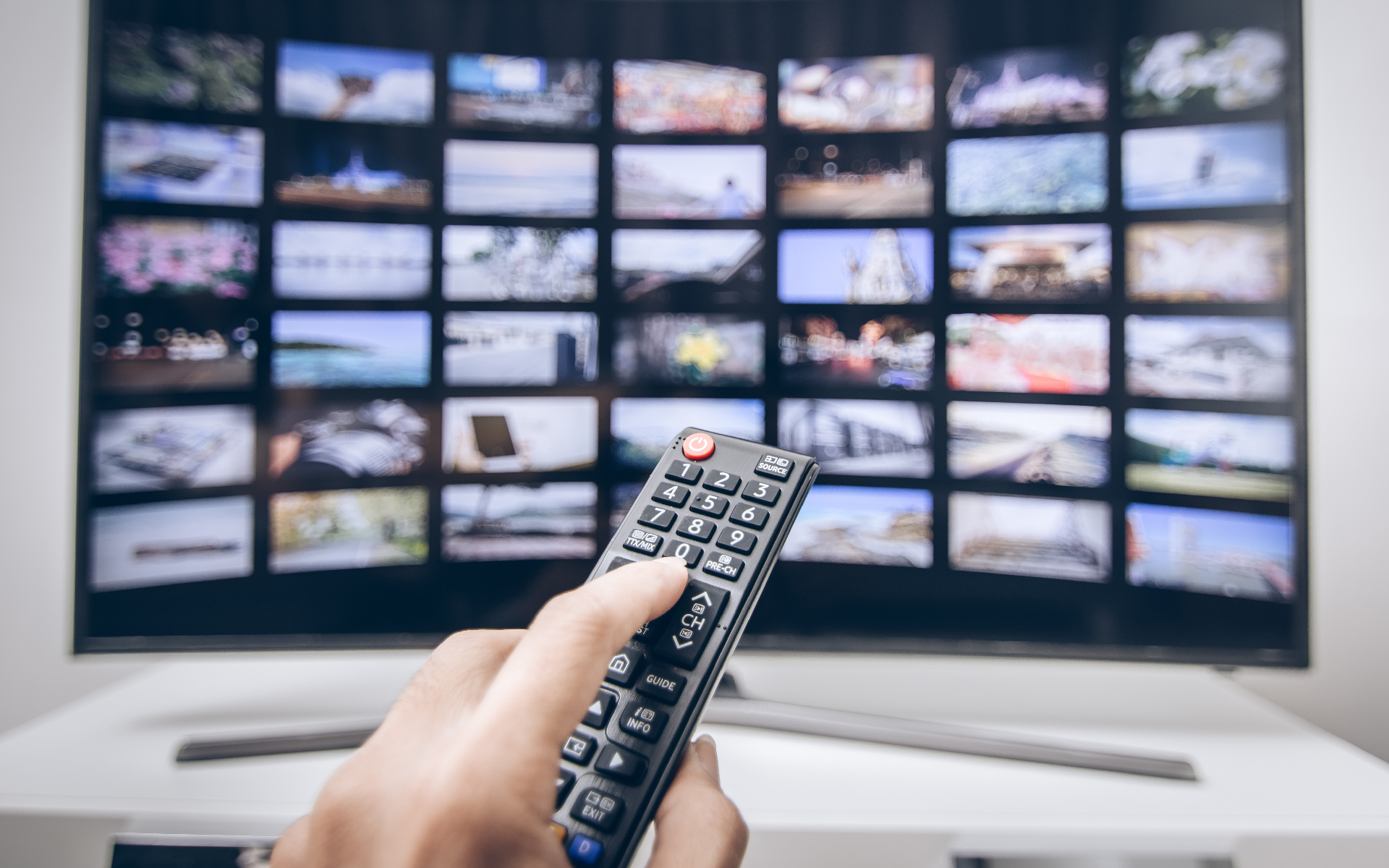 4 Ways Athleta Nailed Their Branding (And How You Can Do It, Too)

Cares for a Cause - Greater Huntsville Humane Society - March 2021

What a year, huh? Ad campaigns sure had to step things up to another level this year amidst a pandemic.

Every year companies continue to step up their marketing game to stand out in the sea of ads to attract their ideal customers. Sometimes they take too big of a risk and their campaign ends up backfiring on them. Other times, their creativity pays off and makes for a widely memorable and potentially viral ad.

In this post, we'll be sharing our team's analysis of some of the best and worst ads we saw in 2020 so we can learn lessons from them and apply those discoveries to our future campaigns.

Hallmark movies are known to be predictable, but addicting to their target audience. So Lume Natural Deodorant decided to create a short rom-com video ad that is cleverly presented by the "Tallmark" channel so their viewers instantly knew that they were picking on Hallmark movies.

Here's why Lindsey picked this video ad as one of the best ads she saw this year:

Like many people, I don't usually take the time to watch an ad longer than about 30 seconds. This ad was definitely an exception. They made advertising a potentially uncomfortable product entertaining and managed to throw some serious shade toward the ever cookie-cutter Hallmark Holiday movies. Truly a creative marketing masterpiece, in my book.

Watch the video for yourself:

Lume Natural Deodorant really took the time to think about their target audience's interests and how they could capture their attention. Since Hallmark movies are notorious for having predictable, yet engaging plots, it was only natural that this ad was exciting to watch.

Lindsey says, "Any product can have a successful marketing campaign. With enough creativity, knowledge of your audience's interests, and quality marketing production, the smallest company can hit a marketing home run."

Wish is a company that prides itself on selling goods for much cheaper than their average price. Their slogan is "Shopping Made Fun", but due to their absurd Facebook ads, most people can argue that it's just shopping made weird.

Here's what Savannah has to say about these ads:

I don't know where to begin! They sell the most random items that you never knew you didn't need. There have also been plenty of flubs where people order couches or face masks (because the variety is that vast) and they arrive comically tiny compared to the image portrayed online. It's the equivalent to ordering a box of king-sized chocolate bars but receiving a single M&M in the mail instead.

Check some of their ads out for yourself: 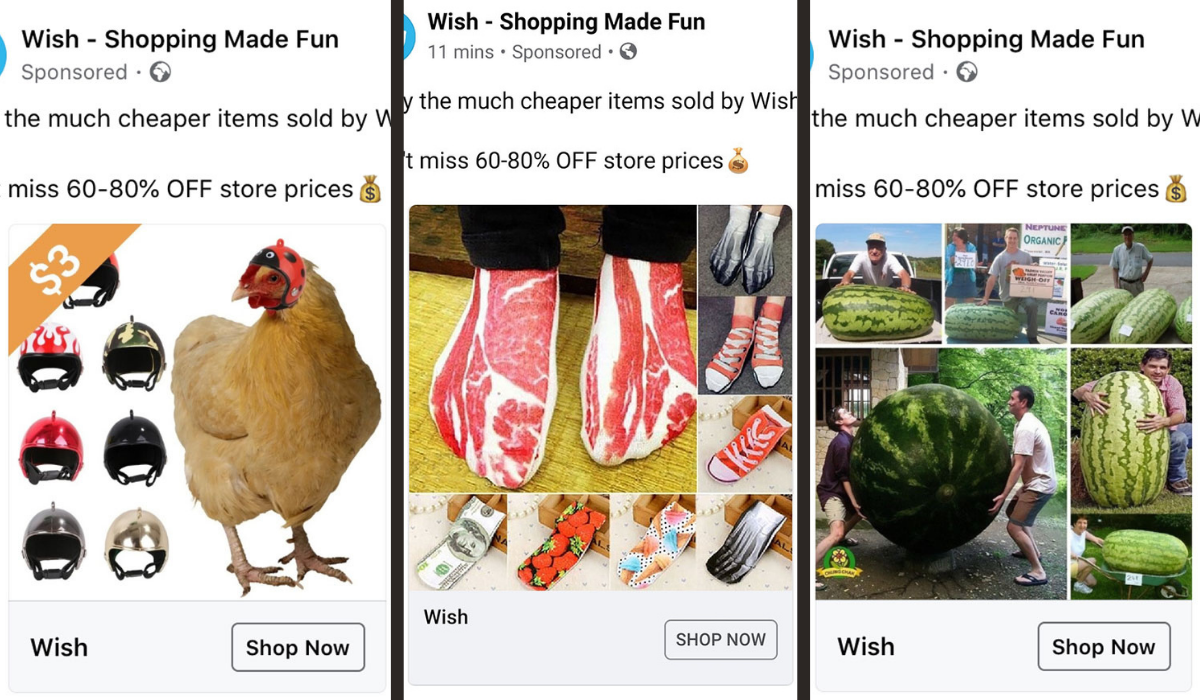 What We Can Learn From These Ads

If you've received a Facebook ad from Wish before, chances are that you were not in the market for any of the products their ads were showing you. Yes, people do engage with these ads just because they are so wacky, but rarely do people actually buy these products. And when they do, they end up disappointed.

@wishshopping the email ads wouldn’t be so bad if...you know, I even GOT my original order shipments in the first place? :) what a waste of money...I’ve never been more appalled by a retail company before.

@WishShopping can y'all fix your ads? Not once have I ever clicked on an ad, app notification, email, text, etc. And been taken to what the ad was for in the first place. Not once. It’s like your company runs via clickbait.

The moral of the story is: use your online ads to market products your audience wants to buy and then follow through on your ads.

It's no secret that the pandemic has affected the livelihood of many people in the service industry. In their endearing "We Will Toast Again" ad campaign, Guinness pledges to help organizations that have been negatively impacted while reminding us that we can still "toast" virtually.

Here's why Jacob chose this as one of the best ads he saw this year:

Guinness gave us a good, wholesome ad that recognizes some of the difficulties that have plagued this year while delivering a message of hope and human resilience and calling us all to lift one another up and be good to each other...and to call our grandparents.

Check out the ad for yourself:

During such a hard time for the whole world, it could be perceived as tacky to promote your product like you normally would. Guinness adapted their campaign to the current circumstances to relate to their audience.

Jacob says, "Guinness spoke into a difficult situation to give hope and remind us of what we still have. I've seen a fair amount of companies using the pandemic to make gimmicky ads, Guinness (and a few other companies) have chosen to use this time to spread wholesome messages that make them stand out above the noise. Gimmicky ads can be funny, but inspiring ones are often more memorable, which I think is ultimately what brands are after."

By creating this wholesome ad and pledging to help their community, you can bet that Guinness' audience will continue to enjoy their product.

Want to get more articles like this directly in your inbox? Join thousands of other marketers. Subscribe today!

Mostly everyone is familiar with the ongoing "war" between the big-name fast-food restaurants, like Wendy's, McDonald's, and Burger King. They like to drag each other on social media or ad campaigns about the quality of their food. For example:

.@PopeyesChicken did you follow us because you need chicken? we have some ... raised without antibiotics pic.twitter.com/a39pswz7Td

Looked who dropped by to see what Spicy Nuggets were supposed to taste like. https://t.co/zYpvTxNohS

So in an effort to showcase that their food contains no artificial preservatives unlike other fast food chains, Burger King launched this ad campaign: 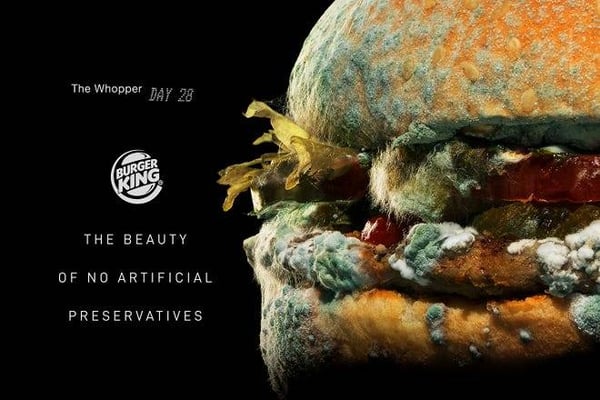 Here's why Jasmine chose this as one of the worst campaigns she saw:

While the ad did capture my attention, it did not make me want to go eat a burger which I think defeats the purpose of the ad. It made me lose my appetite all together.

Burger King's choice to do this campaign seems like they were really focused on slamming their competitors instead of just attracting their audience to their restaurant. It's always important to remember your overall goal when creating a campaign, which is to attract people to your business, instead of driving them away.

To showcase the GMC Sierra's new tailgate features, GMC created a funny commercial that perfectly highlighted the tailgate's new functionalities. In the video, people of all ages drop their jaws when they see the new tailgate and even other trucks have a funny reaction to it.

Here's why Justin thought this was a successful marketing move:

It was very eye catching how they showed people of all ages being shocked about the versatility of the tailgate. They used multiple age ranges and had some funny segments too.

Check out the commercial for yourself:

Since all car companies are always showcasing their new car's latest features, it has forced them to become creative with their commercials. GMC took a part of their truck that most people may think isn't a big deal and showcased how useful it can actually be in an entertaining way.

By focusing on one aspect of their new truck and adding just the right amount of humor, GMC was able to make a memorable commercial.

We can apply this same creative thinking strategy to our future campaigns by taking topics or features that may seem boring and finding new and exciting ways to present them.

Trustmark shared an ad that showed a man advancing through his career over the years. What each scene had in common was his wife bringing him his lunch, a cup of coffee, etc. At the end of the commercial, he's retired on a yacht only to still have his wife serving him.

Here's why Michelle thought this was a bad marketing move:

I think this was completely chauvinistic! My jaw literally dropped watching this commercial. I felt so disgusted and vowed that I would never invest with them. So Trustmark, men are the only ones going to work today and breadwinning??!! Hello, it is 2020! Women matter and so do all races. Come on marketers and advertisers! We can do better than this.

In fact, here are some stats that prove that women are just as relevant in the workplace as men:

Here's What We Can Learn From This Ad

Think before you create. Expose yourself to more diversity on a daily basis. Don't only consider how this ad will convert and resonate with your target persona. Take some extra time to think about people outside of your target demographic. How will this ad make them feel?

Get feedback from a diverse audience of genders and races. Yes, targeting your advertising is a good marketing move, but not in a polarized offensive fashion. Inclusivity is the new age of marketing and advertising. Don't let your company miss the mark.

Those were just 6 of the many ads our team saw this year. We are able to learn something from each of these campaigns, whether it's good or bad. We are looking forward to seeing what creative campaigns we'll see next year.

Want to get more articles like this directly in your inbox? Join thousands of other marketers. Subscribe today!

4 Ways Athleta Nailed Their Branding (And How You Can Do It, Too)

Cares for a Cause - Greater Huntsville Humane Society - March 2021

Image in a Box Launches Cares for a Cause Initiative

Cares for a Cause - The EarlyWorks Family of Museums - December 2020